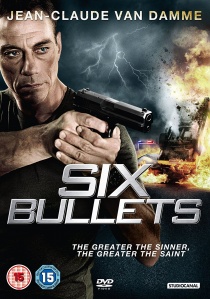 Reformed mercenary Samson Gaul (Jean-Claude Van Damme) has made rescuing stolen children his speciality - until his latest daring rescue attempt goes terribly wrong and results in too many casualties. Wracked with paralyzing guilt, Gaul gives up his vigilante ways to open a local butcher store.

But when Peggy Fayden, daughter of down-on-his-luck professional fighter Andrew Fayden (Joe Flanigan), is abducted right before his big comeback fight, Andrew and his wife Monica (Anna-Louise Plowman) must convince Gaul to come out of retirement.

But Gaul's fast-and-loose style might be more of a liability than the Faydens realize. After tracking down and threatening the local mob boss, Gaul gets a solid lead on Peggy's whereabouts. Unfortunately, the next day the police discover the remains of a young blond girl wearing Peggy's bracelet. When the DNA match comes back positive, the Faydens blame Gaul and his no-holds-barred tactics. After watching his best work turn deadly for a second time, Gaul retires again, this time to the bottle.

With Peggy's corpse trapped in his mind, Gaul recalls how the dead girl he saw was wearing the bracelet on her left arm; Peggy always wore her on her right. Realizing the ruse, Gaul rushes to tell the Faydens. Disbelieving at first, the Faydens quickly side with Gaul after he forces a confession and a name out of the medical examiner. The name is Stelu, the Minister of Defense and his plan is to use Peggy to sweeten a deal he has with a Sudanese General. Unless Gaul and the Faydens can stop him.

Loaded with Gaul's artillery, they infiltrate the military complex where Peggy's been hidden. They manage to dispatch the guards easily and rescue a captured blonde. But it turns out to have been a trap. Surrounded and outgunned, Gaul, Monica and Andrew must decide: trade the decoy for Peggy or end Stelu's brutality for good.

DVD
Inspired by real-events, The Serpent, released on DVD 22nd February 2021 from ITV Studios Home Entertainment, tells true story of how Charles Sobrajh, one of the most elusive & wanted criminals was ... END_OF_DOCUMENT_TOKEN_TO_BE_REPLACED
Top PicksView