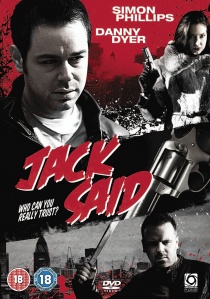 Nathan (Dyer) is a member of a criminal gang headed by the notorious Guv'nor (and his psychotic daughter Natalie (Ashlie Walker, TV's Bad Girl's, Casualty). He befriends fellow gang member Jack Adleth (Phillips) who, unbeknownst to Nathan, is an undercover police officer.

Nathan harbours a secret too and when he steals from the gangster family and goes underground he trusts Jack to look after his sister Erin (Rita Ramnani, Just for the Record). Inheriting Nathan's role in the gang, Jack must now walk a fine line between his duty as a police officer and what is required of him by Natalie.

As he falls in love with Erin, the lines between his real and assumed identities begin to blur and his conscience and loyalty are put to the test. A tragedy seems inevitable and when it comes, Jack must regroup and then mete out his own brand of justice, fuelled by revenge, on the streets of Amsterdam.

DVD
Released on DVD 4th April 2022 from BBC Worldwide, Golden Globe, Emmy and BAFTA winner Ben Whishaw stars in This Is Going To Hurt, Adam Kay's adaptation of his best-selling memoir about life as a junior doctor. END_OF_DOCUMENT_TOKEN_TO_BE_REPLACED
Top PicksView