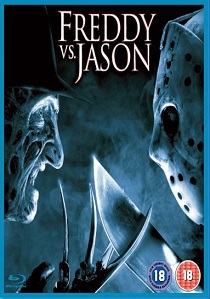 NewsHorror
News Article Go back to homepage
At the time it had been rumoured and anticipated for years... the ultimate showdown between two of the biggest icons of the horror genre. Now Freddy vs. Jason slashes its way onto Blu-ray on 28th September 2009 courtesy of Entertainment In Video.
Chris Marquette, Kelly Rowland, Jason Ritter, Monica Keena, Ken Kirzinger, Robert Englund
Ronny Yu
Robert Shaye, Douglas Curtis, Sean S. Cunningham, Stokely Chaffin
Entertainment in Video
1 hour 37 minutes
28/09/2009
Thank you for supporting DVD365.net when you order using the link(s) below. As an Amazon Associate we earn from qualifying purchases
Buy BD
Information

At the time it had been rumoured and anticipated for years... the ultimate showdown between two of the biggest icons of the horror genre. Now Freddy vs. Jason, which on its opening weekend was the biggest US box-office success ever for a horror film - slashes its way onto Blu-ray on 28th September 2009 courtesy of Entertainment In Video.

Directed by Ronny Yu, the Hong Kong-based visionary behind the seminal The Bride With The White Hair and produced by Sean S Cunningham (creator and producer of the legendary Friday the 13th series), Freddy vs. Jason stars the brilliant Robert Englund, who has played Freddy Krueger since the burns-scarred dream demon's creation in 1984, and former stunt man turned actor Ken Kirzinger as the hockey-masked and seemingly indestructible killer, Jason Voorhees.

Freddy vs. Jason also marks the feature film debut of Kelly Rowland, one third of Destiny's Child which is still one of the biggest-selling girl groups of all time.

Freddy Krueger (Robert Englund) is in hell - literally. It's been nearly 10 years since he last invaded peoples' dreams to exact his deadly form of revenge but now his memory has been systematically erased by a town determined to put an end to Freddy once and for all. Potential victims have been drugged to prevent them from dreaming, rendering impotent the master of nightmares. They've eliminated their fear of Freddy, absolute torture for an egomaniac who's a legend in his own psychopathic mind.

Like an inmate with a life sentence, Krueger is reduced to plotting a fantastic revenge that will never happen. Until, that is, he resurrects Jason Voorhees. Jason is the perfect means for Freddy to once again instill fear on Elm Street and recognising how easily manipulated he is, Freddy tricks Jason into journeying to Springwood to start a new reign of terror.

But as the bodies begin to pile up on Elm Street and Freddy's fearsome reputation assumes a new life, he discovers that Jason isn't willing to step aside so easily. Now, with a terrified town in the middle, the two titans of terror enter into a horrifying showdown of epic proportions, alternating between the world of dreams and the harsh reality of the real world.

BD
A stellar cast sizzles in Heat, a taut psychological drama about an obsessive detective and a brilliant thief whose fates are linked in the aftermath of a high-stakes securities heist, released on 4K UHD 8th August 2022 from ... END_OF_DOCUMENT_TOKEN_TO_BE_REPLACED
Top PicksView