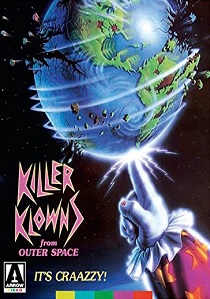 Clowns can be terrifying at the best of times - especially when they're Killer Klowns from Outer Space - released on Dual Format Blu-ray and DVD by Arrow Films on 24th August 2014.

When Mike and his girlfriend Debbie turn up at the local police station warning that a gang of homicidal alien clowns have arrived in the town of Crescent Grove, the cops are naturally sceptical. Talk of popcorn-firing guns and a spaceship shaped like a circus tent out in the woods hardly helps to convince them.

Before long, however, reports start coming in from anxious locals reporting similar run-ins with the colourfully-dressed, large shoe-wearing assailants. There can no longer be any doubt - the Killer Klowns from Outer Space are here and they're out to tun the population into candy floss!

The sole directorial effort from the Chiodo brothers - the special effects team behind such hits as Critters and Team America: World Police - Killer Klowns from Outer Space is the wacky 1988 horror comedy classic against which all other knowing B-movie efforts should be measured. So, in the words of the film's opening theme song, hop aboard the "nightmare merry-go-round" and brace yourself for a cinematic experience unparalleled in this galaxy!