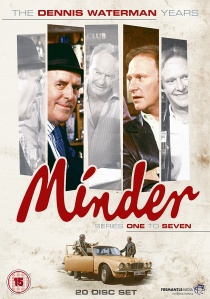 Between 1979 to 1989, for seven of its eventual ten series run, the comedy-drama Minder was a regular must-see programme on everyone's television viewing schedule, thanks in no small part to the legendary pairing of stars George Cole and Dennis Waterman. Now, all 68 episodes from the show's classic era have been brought together on 20 discs for Minder - The Dennis Waterman Years, released on DVD by Fremantle Home Entertainment on 29th August 2011, an essential DVD collection of what the Daily Telegraph once called "the most entertaining, most tightly scripted, inventively comic and sharply directed drama series to be found on any of our television channels".

Cole stars as Arthur Daley, a man synonymous with dodgy goods and shady deals who knows a "nice little earner" when he sees one. A well dressed but unscrupulous importer-exporter, wholesaler, used-car salesman and all round dodgy dealer, Arthur is willing to take on anything from which there is money to be made, whether within the law or not.

Knowing all too well the perils of being involved in his particular line of business, Arthur hires Terry McCann (Waterman), a former professional boxer and ex-prison convict, to be his own personal "minder" to protect him from other small time crooks and anybody else whose toes he happens to step on.

Thanks to Arthur's frequent ill-advised schemes, this dodgy duo encounters an endless cavalcade of equally disreputable underworld figures, often leaving them no option but to fight and outwit their way out of trouble and usually unwittingly and comically putting several wrongs right along the way.