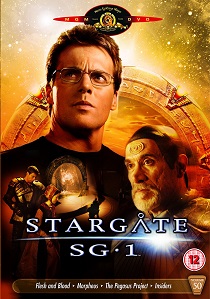 Stargate fans are in for a treat on 13th August 2007 as Twentieth Century Fox Home Entertainment releases two new series to add to Stargate collections. The critically-acclaimed, multi award-winning Sci-Fi adventure series Stargate SG-1, Season 10, Volume 1 and Stargate Infinity - the brand new animated action-adventure series are available to own for the first time on DVD.

Stargate Infinity follows four exceptional Air Force Academy cadets and a wrongly court-martialed Stargate veteran who must travel through the gated wormholes from one planet to the next in order to protect a mysterious alien creature from the sinister clutches of a new extraterrestrial enemy.

Stargate SG-1 Season 10 is the final adventure for the team and the last instalment in the SG1 collection. It sees the SG-1 military squad undertaking missions across the universe through the Stargates, encountering various alien creatures and cultures on their journeys as they set out on another mission to defend the earth from the unknown. This new season is a historic one as it celebrates the 200th episode, making it the longest-running science fiction series on television, surpassing The X-Files and every series of Star Trek.

Stargate SG-1 is an action-packed sci-adventure series involving a team of U.S. Air Force soldiers and scientists who use ancient portals in space called Stargates to travel instantaneously from their Stargate Command base in the Rocky Mountains to other planets to explore, forge alliances, defuse crises, establish trade and investigate mysteries.

Stargate SG-1 has become one of the most popular and longest running science fiction shows in television history and the DVD is packed full of extras including audio commentary, photo galleries and a Moving Menus, making it a must-buy for any Sci-Fi or Stargate fans. Further volumes in the tenth series will be released between September and December this year.

HotDVDBD3D-BDUHD
An ancient evil is unleashed after centuries of captivity and her lust for revenge threatens to destroy the world in The Mummy, a spectacular saga coming to 4K Ultra HD, 3D Blu-ray, Blu-ray, DVD and On Demand on 23rd October 2017 from Universal Pictures (UK). END_OF_DOCUMENT_TOKEN_TO_BE_REPLACED
Top PicksView