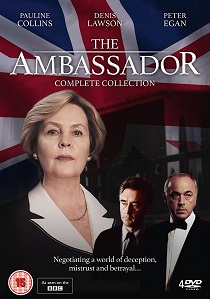 The Ambassador: The Complete Collection (1998)

Harriet Smith is the newly appointed British ambassador to Ireland; recently widowed, this sharp-witted confident woman, holds one of Britain's most coveted and powerful Embassy posts and has unenviable task of quelling the mounting tensions between the two countries. She must perform a delicate balancing act between raising her two teenage sons and the demands of her career.

Harriet finds herself in a sinister and dangerous world far removed from the cocktail parties of Downing Street. Entangled in a complicated web of half-truths and withheld information - rife both in and outside of the Embassy walls - Harriet is up against a host of people who would love nothing more than to see her fail.

This heart-pounding political drama makes its UK DVD debut as The Ambassador: Complete Collection, featuring series one and two, on 25th July 2016 courtesy of Simpy Media.

HotUHD
Say the 'B' word three times and have a wonderful Day-O as Tim Burton's Beetlejuice arrives for the first time on 4K UHD 31st August 2020 from Warner Home Video. END_OF_DOCUMENT_TOKEN_TO_BE_REPLACED
Top PicksView