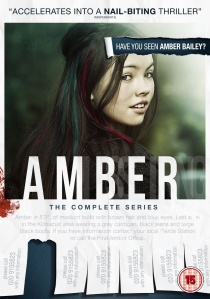 NewsTV SeriesDrama
News Article Go back to homepage
All four episodes of the Irish drama miniseries by Rob Cawley and Paul Duane, Amber, is released on DVD by Arrow Films on 30th June 2014.
Eva Birthistle, David Murray, Lauryn Canny
Thaddeus O'Sullivan
Arrow Films
3 hours 19 minutes
30/06/2014
#Amber
Thank you for supporting DVD365.net when you order using the link(s) below. As an Amazon Associate we earn from qualifying purchases
Buy DVD
Information

When 14 year old Amber Bailey fails to return home, after not turning up at her best friends' house as arranged, a long and drawn-out search is mounted. Her recently separated parents, Ben and Sarah, pushed increasingly into the harsh public glare of the media spotlight, are plunged into an unthinkable nightmare, which only grows with each passing day.

As the days, months and years go by the mystery deepens, and disturbing new clues come to light, raising more questions than answers. And as the nation becomes gripped with the story of the missing teen all people can do is wonder - what on earth really happened to Amber?

All four episodes of the Irish drama miniseries by Rob Cawley and Paul Duane, Amber, is released on DVD by Arrow Films on 30th June 2014.