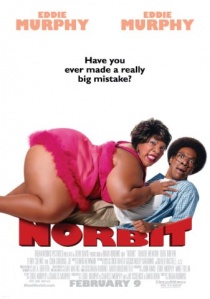 Golden Globe® Winner Eddie Murphy (Dreamgirls) stars as the wonderfully unlucky Norbit, a mild mannered, geeky orphan raised by Mr Wong (also Murphy) manager of Golden Wonton Restaurant and Orphanage in Boiling Springs. Written and produced by Murphy, Norbit is the comical tale in which Murphy uses his extraordinary talents to bring a range of diverse and unforgettable characters to life in a boisterous, bawdy comedy.

Growing up at the orphanage, Norbit meets his true soul-mate Kate (Thandie Newton, Crash) and the two become inseparable until Kate is adopted and leaves to begin her new life. Lonely and easily intimidated, Norbit is rescued on the school playground from the taunts of bullies by Rasputia (also Murphy), a larger than life, junk food-chugging queen who wields a mean right hook. As Norbit and Rasputia grow up, he becomes part of her crazed family until ultimately he is bullied into marrying her.

Settling into a life of marital gloom, Norbit's world is shaken up with the return of grown-up and beautiful Kate, who returns to purchase the orphanage from a retiring Mr Wong. His love rekindled, Norbit knows he must find a way to end his loveless marriage, save Kate from marrying crooked philanderer Deion (Cuba Gooding Jr, Jerry Maguire) and win back the love of his one and only soul-mate.

Released by Paramount Home Entertainment on 9th July 2007 with a host of extras, Norbit, features Eddie Murphy in an array of characters in this uplifting and uproarious tale showing that nice guys do sometimes finish first.