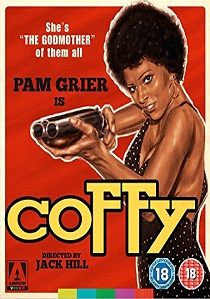 NewsActionDramaAdventure
News Article Go back to homepage
Regarded as one of the best of the Blaxploitation genre along with Shaft and Superfly, Coffy, released on Blu-ray by Arrow Video on 6th April 2015, has been described as one of the most entertaining films ever made by Quentin Tarantino.
Sid Haig, Allan Arbus, William Elliott, Robert DoQui, Booker Bradshaw, Pam Grier
Jack Hill
Buzz Feitshans, Samuel Z. Arkoff, Robert A. Papazian, Salvatore Billitteri
Arrow Video
1 hour 31 minutes
06/04/2015
#Coffy
Thank you for supporting DVD365.net when you order using the link(s) below. As an Amazon Associate we earn from qualifying purchases
Buy BD
Information

Regarded as one of the best of the Blaxploitation genre along with Shaft and Superfly, Coffy, released on Blu-ray by Arrow Video on 6th April 2015, has been described as one of the most entertaining films ever made by Quentin Tarantino.

With Coffy, Pam Grier was catapulted to stardom and iconic status following solid roles in earlier chicks in chains films. Here she plays nurse Coffy Coffin seeking vigilante justice when her little sister is hospitalised by a smack pusher. Coffy uses her body, bullets and blades to get justice, working her way to the top of the criminal ring. But as she nears the top she finds the level of corruption is closer to home than she thinks.

When American International Pictures lost the chance to make Cleopatra Jones the studio looked for another project and turned to up and coming B-movie auteur Jack Hill (Spider Baby, Pit Stop). Coffy was such a success that the studio fast tracked Grier's next movie (Foxy Brown) with Hill straight away.

HotDVDBDDIGITAL
With stunning revelations, glamorous journeys, and the arrival of the Jazz Age, Downton Abbey: A New Era, released on DVD and Blu-ray 15th August 2022 from Warner Home Video, will be the Crawleys' biggest adventure yet as they grapple with their future and new intrigue about ... END_OF_DOCUMENT_TOKEN_TO_BE_REPLACED
Top PicksView