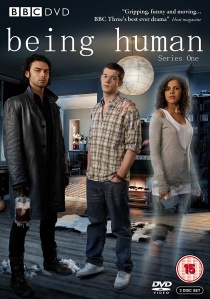 Russell Tovey (Little Dorrit, Doctor Who, The History Boys), Lenora Crichlow (Sugar Rush, Doctor Who, Kiss Of Death) and Aidan Turner (The Clinic) star as housemates trying to live normal lives despite very unusual afflictions in Being Human. This witty, sexy and thrilling six-part BBC Three drama is released on DVD from 20th April 2009 from 2entertain.

Following the lives of the twenty-somethings and their secret double-lives - as a werewolf, vampire and ghost - Being Human was first transmitted in February 2008 as a 60-minute special. Popular with viewers and critics alike, the pilot peaked at nearly 450,000 viewers whilst gaining rave reviews and online petitions begging for a series to be commissioned.

Russell Tovey stars as the lovable George, battling with his double identity as a mild-mannered and geeky hospital porter who for one night a month is transformed into a flesh-hungry, predatory werewolf.

Aidan Turner plays the good-looking and laid-back Mitchell who, in contrast to George, has the gift of the gab and an easy confidence with the ladies. But he is also a blood-sucking vampire struggling with going cold-turkey from the blood he craves.

Completing the flat-share trio is Annie, played by Lenora Crichlow, a talkative ghost lacking in self-confidence and desperate for company. Annie is still pining after her fiancé, whom she was due to marry before the fatal accident that left her with her ghostly affliction - and who happens to be the landlord of their flat.

Follow the trio as they do their best to live their lives as normally as possible despite their strange and dark secrets.

But with unwelcome intruders into their world, rumblings about an impending revolution from the vampire underworld and constant threats of exposure - on top of the usual issues faced by young people surrounding love, work and mates - the only thing they may be able to rely on in their heightened world, is each other.

BD
In The Little Things, released on DVD and Blu-ray 10th May 2021 from Warner Home Video, Kern County Deputy Sheriff Joe "Deke" Deacon is sent to Los Angeles for what should have been a quick evidence ... END_OF_DOCUMENT_TOKEN_TO_BE_REPLACED
Hot PicksView