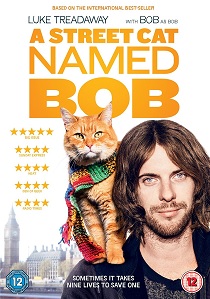 NewsComedyFamily
News Article Go back to homepage
Based on the international best-selling book, A Street Cat Named Bob, released on DVD and Blu-ray by Sony Pictures Home Entertainment on 27th February 2017, tells the true story of how James Bowen, a busker and recovering drug addict, has his life transformed by his friendship with a stray cat.
Luke Treadaway, Ruth Gedmintas, Joanne Froggatt, Anthony Head, Bob the Cat
Roger Spottiswoode
Adam Rolston
Sony Pictures Home Entertainment
1 hour 39 minutes
27/02/2017
#AStreetCatNamedBob
Thank you for supporting DVD365.net when you order using the link(s) below. As an Amazon Associate we earn from qualifying purchases
Buy DVD
Buy BD
Information

Based on the much-loved, international best-selling book, A Street Cat Named Bob, released on DVD and Blu-ray by Sony Pictures Home Entertainment on 27th February 2017, tells the moving and life-affirming true story of how James Bowen, a busker and recovering drug addict, has his life transformed by his friendship with a stray cat.

When James Bowen found an injured cat prowling the hallway of his sheltered accommodation, little did he know that this ginger tom, whom he named Bob would bring light and hope to his life, changing his world forever. Bowen had spent the previous ten years living on the streets, or in temporary accommodation and had slipped into drug use in a bid to escape the realities of homelessness. By the time he met Bob in March 2007 he had enrolled in a drug rehab program and was living in sheltered accommodation in North London.

Despite those tentative steps along the path to recovery, when Bowen met Bob he was still living hand to mouth, struggling to cope with life. Yet Bowen could not turn his back on Bob; he felt compelled to help this injured animal. Once Bob had healed, the pair became inseparable. Bob gained a loving friend, Bowen an inspiration to change his life.

Bowen committed his and Bob's extraordinary story to paper. Their tale was published in 2012, when Bowen teamed up with writer Garry Jenkins and their debut publication together, A Street Cat Named Bob, became a bestseller. To date it has sold more than 5 million copies worldwide.