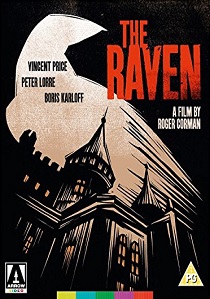 Although The Raven is one of Edgar Allan Poe's most famous poems, the lack of a narrative hook initially stumped screen-writing legend Richard Matheson (I Am Legend, The Incredible Shrinking Man, Duel) until he realised that the idea of adapting the poem was so ridiculous that he might as well make it a comedy.

And what a comedy! Vincent Price, Peter Lorre and Boris Karloff play rival magicians whose paths cross when Dr Craven (Price) hears Dr Bedlo tap-tap-tapping on his windowpane. For Bedlo has been turned into a raven by Dr Scarabus (Karloff), and when transformed back into his old self he naturally vows revenge. But the scripted rivalry is as nothing compared to three great horror masters relentlessly upstaging each other even a young Jack Nicholson, as Bedlo's son, barely gets a look-in.

If there's not much authentic Poe in these sorcery shenanigans, the sets and cinematography more than compensate: director Roger Corman was by then a master of conjuring Gothic atmosphere on a very modest budget.

The Roger Corman classic horror-spoof, The Raven is released on Blu-ray by Arrow Films on 9th March 2015.