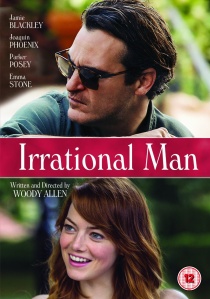 Woody Allens Irrational Man will arrive DVD 1st February 2016 courtesy of Warner Home Video. This comedy-drama stars Joaquin Phoenix (Her) as Abe Lucas, a tormented new college philosophy professor, on a journey to find meaning in life. When he and his favourite student Jill Pollard, played by Emma Stone (Birdman: Or [The Unexpected Virtue of Ignorance]), mistakenly overhear a strangers conversation, a chain of events is unleashed that permanently affect him and those around him.

Rounding out the stellar ensemble cast are Jamie Blackley (If I Stay) and Parker Posey (The House of Yes), playing Jills boyfriend and one of the schools chemistry professors, respectively.

Irrational Man premiered at this years Cannes Film Festival and received many positive reviews there and upon opening theatrically. The Hollywood Reporters David Rooney said, The energy and freshness here are quite intoxicating. A darkly humorous quasi-thriller explored with a deft lightness of touch - propelled all the way by the sparky chemistry of Joaquin Phoenix and Emma Stone.

Soon after arriving to teach at a small town college, Abe Lucas (Joaquin Phoenix) gets involved with two women, Rita Richards (Parker Posey), a lonely professor who wants him to rescue her from her unhappy marriage; and Jill Pollard (Emma Stone), his best student, who becomes his closest friend. While Jill loves her boyfriend Roy (Jamie Blackley), she finds Abe's tortured, artistic personality and exotic past irresistible. Pure chance changes everything when Abe and Jill overhear a stranger's conversation and when Abe makes a profound choice, he is able to embrace life to the fullest again. But his decision sets off a chain of events that will affect him, Jill and Rita forever.