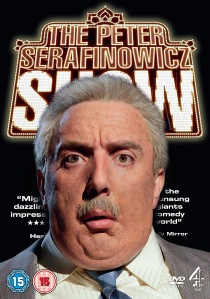 The fast-paced Rose d'Or winning and BAFTA Award-nominated comedy sketch series The Peter Serafinowicz Show, starring Peter Serafinowicz (Spaced, Look Around You) is available to own on DVD from 1st February 2010, courtesy of 4DVD.

Over six episodes, The Peter Serafinowicz Show immerses viewers in a world where Poirot and Miss Marple team up to solve murder mysteries, Al Pacino teaches a group of actors how to cry on screen with the help of his pet ant 'Limpy', Noel Edmonds unveils his scary new gameshow 'Dead or Un-Dead' and Darth Vader meets his ideal woman.

Peter is best known for his roles in Spaced as Duane Benzie, a nemesis of Simon Pegg's character Tim Bisley and the critically acclaimed Look Around You, which Serafinowicz starred in and co-wrote. Peter also starred alongside Simon Pegg in Shaun of the Dead as his ultra-professional flatmate, Pete and with Vince Vaughan and Jon Favreau in the Hollywood blockbuster Couples Retreat.

He made his broadcasting debut in 1993 on Radio 1 show The Knowledge, a spoof documentary about the music industry and has since appeared on a number of other shows including, Harry Hill's Fruit Corner, Weekending, and Grievous Bodily Radio on Radio 4.

Peter has made a number of guest appearances on both television and radio panel shows including, Have I Got News for You, 8 Out of 10 Cats, QI, Would I Lie To You and Never Mind the Buzzcocks as well as being a regular guest on The 99p Challenge. This DVD features an hour of extra material including, the 2008 Christmas Special, deleted scenes, a behind-the-scenes documentary about the making of the show and commentary on episodes three and six

HotDVDTV
Featuring every episode of the entire series in an 8-disc box set, the hilarious BBC comedy Keeping Up Appearances is released on DVD 28th November 2022 ... END_OF_DOCUMENT_TOKEN_TO_BE_REPLACED
Top PicksView