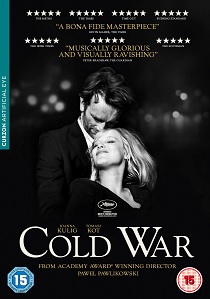 Pawel Pawlikowski follows his Oscar-winning Ida with the stunning Cold War, an epic romance set against the backdrop of Europe after World War II. Sumptuously shot in luminous black and white, it spans decades and nations to tell a love story that is as tragic as it is moving, and as transportive as it is honest.

In the ruins of post-war Poland, Wiktor (Tomasz Kot) and Zula (Joanna Kulig) fall deeply, obsessively and destructively in love. As performing musicians forced to play into the Soviet propaganda machine, they dream of escaping to the creative freedom of the West. But one day, as they spot their chance to make a break for Paris, both make a split decision that will mark their lives forever. As the years march on in the wake of that moment, Wiktor and Zula watch the world changing around them, always struggling to find their moment in time.

Winner of the Best Director award at the Cannes Film Festival 2018, Pawlikowski melds the personal with the political to exquisite effect. Set to a soundtrack that takes you from the rustic folk songs of rural Poland to the sultry jazz of a Paris basement bar, it's a wistful and dreamlike journey through a divided continent - and a heartbreaking portrait of ill-fated love.

DVD
For the first time in the cinematic history of Spider-Man, our friendly neighborhood hero's identity is revealed in Spider-Man: No Way Home, released on DVD, Blu-ray and 4K UHD 4th April 2022 from Sony Pictures Home ... END_OF_DOCUMENT_TOKEN_TO_BE_REPLACED
Top PicksView