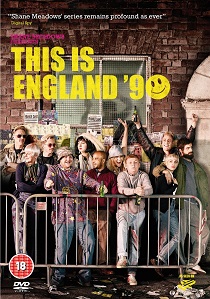 Written and directed by Shane Meadows, This Is England '90, released on DVD and Blu-ray on 30th November 2015 from ITV Studios Home Entertainment, follows on from the critically acclaimed feature This Is England (2006) and the subsequent BAFTA winning series' This Is England '86 and '88 - two of Channel 4's highest ever rated dramas.

Charting the turbulent lives of a group of friends looking for love, a laugh and a future as Britain moves from the 80s into the 90s, This Is England follows the misadventures of Woody, Lol, Shaun and the rest of the gang as they struggle with the soaring highs and harrowing lows of growing up - and moving on.

Set to a seminal soundtrack, this much-anticipated final chapter finds the gang embracing the rave scene of a new decade. But the utter hilarity and unadulterated joy of their 'summer of love' soon gives way to a bleak winter. As the stark reality of life takes hold and, ultimately, takes life, this new season will see an enormous transformation in everyone.

UHD
From the Wachowski brothers and Joel Silver, the masterminds behind The Matrix trilogy, comes another intriguing, action-packed fantasy-thriller in V for Vendetta, released on 4K UHD 2nd November 2020 from Warner Home Video. END_OF_DOCUMENT_TOKEN_TO_BE_REPLACED
Top PicksView