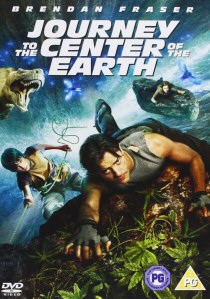 Award Winning Brendan Fraser (The Mummy, Mummy Returns, Crash) stars in the stunning adventure for all the family, Journey To The Centre Of The Earth. Brought to the small screen using new 3D technology, this contemporary adaptation of the classic Jules Verne fantasy is the first full-length feature film to be released in 3D on DVD in the UK.

Packed with value-added extras, the DVD will include both 2D and 3D formats and comes with two pairs of special 3D glasses for home viewing. Entertainment In Video is releasing Journey To The Centre Of The Earth to buy and rent on DVD and to buy on Blu-Ray on 3rd November 2008.

Directed by Academy Award--Winning visual effects artist Eric Brevig, Journey To The Centre Of The Earth is a true family adventure in which three explorers are plunged into a strange new world beneath the Earth's surface. From here they embark on an amazing journey that is fraught with danger. It co-stars a host of talent including Josh Hutcherson (Bridge To Terabithia, The Polar Express) and Anita Briem (TV's The Tudors; TV's Doctor Who).

When ambitious science professor Trevor Anderson (Brendan Fraser) develops a controversial hypothesis, his laboratory is threatened with closure but during a subsequent scientific expedition in Iceland, Trevor, his nephew Sean (Josh Hutcherson) and their beautiful local guide, Hannah (Anita Briem), are unexpectedly trapped in a cave from which their only escape is to go deeper and deeper beneath the Earth's surface.

Travelling through never-before-seen worlds, the trio come face-to-face with surreal and unimaginable creatures - including man-eating plants, giant flying piranha, glow birds and terrifying dinosaurs from days past. But the adventurers soon realise that as volcanic activity increases around them, they must find a way back to the Earth's surface before it is too late...

With spectacular photo-real environments and revolutionary new filmmaking techniques, Journey to the Centre of the Earth is a unique experience and a very real epic adventure.

UHD
With all the heart and humour audiences expect from Walt Disney Animation Studios, Big Hero 6, released on 4K UHD for the first time 30th August 2021 and exclusive to Zavvi, introduces you to a lovable robot who will change ... END_OF_DOCUMENT_TOKEN_TO_BE_REPLACED
Top PicksView