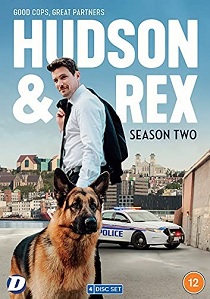 Detective Charlie Hudson (John Reardo) can count on his team, for the St. John's major crimes unit has all it takes! Always by his side: former K-9 German Shepherd Rex, who has saved Charlie in more than one way. Dr. Sarah Truong, the attractive Head of Forensics might become more than just a colleague to Charlie.

Headed by hard-boiled Superintendent Joe Donovan and completed by genius tech analyst Jesse, it is Rex, who keeps the team's spirits high in face of St. John's seedy elements they have to hunt down. Charlie's dedication and Rex's keen, super-human senses and stealth make this unit special.

From kidnapping, homicide and hostage situations, to fraud and corruption, Charlie, Rex and their team are a force to be reckoned with!

Hudson and Rex: Season 2 is released on DVD 11th November 2021 from Dazzler Media.

DVD
For the first time in the cinematic history of Spider-Man, our friendly neighborhood hero's identity is revealed in Spider-Man: No Way Home, released on DVD, Blu-ray and 4K UHD 4th April 2022 from Sony Pictures Home ... END_OF_DOCUMENT_TOKEN_TO_BE_REPLACED
Top PicksView