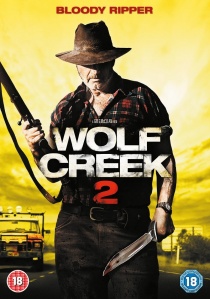 NewsHorrorThrillerCrime
News Article Go back to homepage
Cranking up the terror to a whole new level, the deadliest killer of the outback has returned as Wolf Creek 2 is released on DVD and Blu-ray on 15th September 2014 courtesy of Entertainment One.
Ben Gerrard, Shane Connor, Philippe Klaus, Shannon Ashlyn, Ryan Corr, John Jarratt
Greg McLean
Samantha Jreissati, Matt Hearn, Evelyn Gilmore, Barbara Gibbs
Entertainment One
1 hour 36 minutes
15/09/2014
#WolfCreek2
Thank you for supporting DVD365.net when you order using the link(s) below. As an Amazon Associate we earn from qualifying purchases
Buy DVD
Buy BD
Information

The deadliest killer of the outback has returned and he's more sadistic, more twisted and more violent than ever before. From the director of Australia's most terrifying horror film, Wolf Creek, comes this brand new sequel that'll grip you by the throat and have you screaming in fear.

Mick Taylor (John Jarratt) is back on the hunt and it's not wild pigs or crocs that he's after. Out for the kill, this outback psychopath continues to add to his staggering body count as he mutilates, dismembers and tortures anyone and everyone he lays his eyes upon.

When two young backpackers venture into the wilderness, they soon find themselves face to face with evil, begging for their lives and bringing a wake of death and gory destruction with them as they attempt to flee. Armed with his trusty knife, sniper rifle and unquenchable thirst for murder, Mick butchers and crashes his way through the wasteland, loving every bloody moment of the violent carnage.

Directed by Greg Mclean (Wolf Creek; Rogue) and starring John Jarratt, (Wolf Creek; Django Unchained) and Ryan Corr, (Where The Wild Things Are), Wolf Creek 2 is released on DVD and Blu-ray on 15th September 2014 courtesy of Entertainment One. 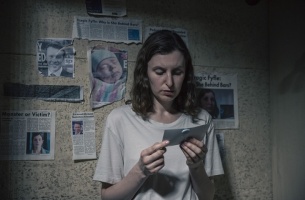 HotDVDTV
Electrifying psychological thriller The Secrets She Keeps returns with a stellar second series as The Secrets She Keeps: Series Two is set to arrive on DVD and digital on 24th October 2022, courtesy of Acorn Media International. END_OF_DOCUMENT_TOKEN_TO_BE_REPLACED
Comments
BD Releases News Pick

BD
After moving to a new town, two brothers discover that the area is a haven for vampires as the classic The Lost Boys is released on 4K UHD 20th September 2022 from Warner Home Video. END_OF_DOCUMENT_TOKEN_TO_BE_REPLACED
Top PicksView