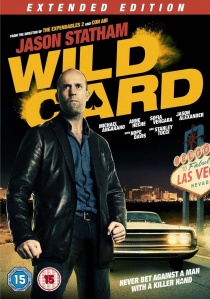 Nick Wild (Statham) is a Las Vegas bodyguard with lethal professional skills and a personal gambling problem. When a sadistic thug beats his friend, Nick strikes back, only to find out the thug is the son of a powerful mob boss. Suddenly Nick is plunged into the criminal underworld, chased by enforcers and wanted by the mob. Having raised the stakes, Nick has one last play to change his fortunes... and this time, it's all or nothing.

From a screenplay by two-time Academy Award® winner William Goldman, based on his novel, Heat, the Wild Card Blu-ray and DVD are packed with bonus features including an exploration of the film's character ensemble and the ways in which Las Vegas defines them, an evolution of the Wild Card screenplay and a director's commentary with Simon West (The Expendables 2, Con Air).

HotDVDBD
From the producers of Nobody and John Wick comes a bare-knuckle, coal-dark holiday action-comedy that says you should always bet on red as Violent Night sledges in on DVD and Blu-ray 6th March 2023 from Warner Home Video. END_OF_DOCUMENT_TOKEN_TO_BE_REPLACED
Top PicksView