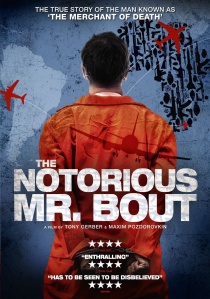 The Notorious Mr. Bout, released on DVD by Kaleidoscope Home Entertainment on 6th October 2014, is the fascinating story that follows Viktor Bout, a Russian entrepreneur, a war profiteer, an aviation magnate, an arms smuggler and, strangest of all, an amateur filmmaker.

Until three days prior to his 2008 arrest on charges of conspiring to kill Americans, Bout kept the camera running, documenting a life spent in the grey areas of international law.

Dubbed 'The Merchant of Death' and portrayed by Nicolas Cage in Hollywood's Lord of War, Viktor Bout can justifiably be called the world's most famous arms dealer.

With unprecedented access to Bout's home movies and DEA surveillance material gathered during the sting operation to bring him down, The Notorious Mr. Bout is a portrait of a life much mythologised but little understood.

HotUHD
StudioCanal is thrilled to announce that the iconic cult classic, Highlander, is being released to own on 4K UHD for the very first time 31st October 2022 with brand-new artwork from celebrated artist Matt Ferguson. END_OF_DOCUMENT_TOKEN_TO_BE_REPLACED
Top PicksView