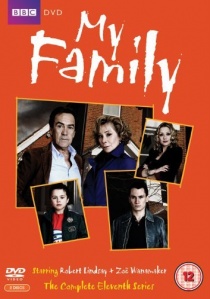 Available to buy on DVD from 15th August 2011 from 2entertain, the nation's favourite dysfunctional family, return for an 11th series of My Family with their audience-winning formula of familiar characters in embarrassing and comical - yet believable - situations.

The multi-award winning My Family follows the fortunes of the fictional Harper family, starring Robert Lindsay and Zoë Wanamaker as Ben and Susan Harper, a middle-class couple who live in Chiswick, West London with their children, Janey and Michael, played by Daniela Denby-Ashe and Gabriel Thomson. The kids might be grown up, but that doesn't mean life gets any easier for Ben and Susan Harper. Quite the opposite in fact!

Series 11 sees Susan and daughter Janey go head-to-head for an exciting job reading children's books on television. Attracted by the £50,000 salary, Janey decides to sabotage her mother's chances, but who will come out winning? Ben is also upping the game at work, summoning his fellow dentists to strike over new conditions. Before that, however, he is offered a promotion and although he has his list of stipulations at the ready, they suddenly slip his mind. Seduced by the prospect of power and a fancy pencil sharpener, Ben accepts the role. But he's about to pay the price with his colleagues...

Janey and Michael pretend to have bought their parents a holiday in Spain knowing that they will be reluctant to spend a fortnight together and when Susan's father turns up out of the blue offering £2 million to buy her out of her marriage to Ben, is divorce on the cards? One thing's for sure, life in this household is never dull!