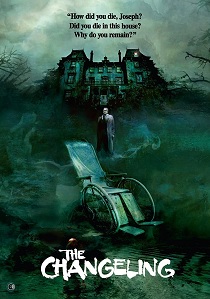 Cited as a huge influence by renowned film-makers including Martin Scorsese and Alejandro Amenabar and lauded by horror aficionados and audiences alike, The Changeling is one of the most chilling horrors of all time and now it arrives in a brand new restored version for the first time on Blu-ray, featuring stunning newly commissioned artwork by Christopher Shy.

One of the last classic horror films to finally be released in high-definition, Peter Medak's (The Krays) The Changeling arrives as a limited edition collector's set including stunning packaging, a poster, a 40-page perfect bound booklet and a slew of newly created special features such as a commentaries, interviews and featurettes. The Changeling: Limited Edition Blu-ray will be released on 13th August 2018 from Second Sight.

Following the tragic death of his wife and daughter in a car crash, composer John Russell leaves the city and retires to an old mansion in the hope of rebuilding his life. The peace and quiet he craves is soon disturbed however. Unexplained noises are just the beginning. Convinced there is a supernatural presence in the house he enlists the help a local historian. What they uncover is more shocking than he could ever have imagined.

George C. Scott (The Hustler) plays the lead alongside a strong cast including his wife Trish Van Devere (Where's Poppa) and Oscar winning actor Melvyn Douglas (Being There).

One of the most highly acclaimed horror films of all time The Changeling will chill you to the bone.

UHD
Now more stunning than ever before, return to the stunning locations and epic adventures in Peter Jackson's Middle-earth in The Hobbit Trilogy, arriving on stunning 4K UHD 30th November 2020 from ... END_OF_DOCUMENT_TOKEN_TO_BE_REPLACED
Top PicksView