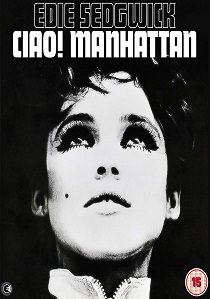 Muse to Andy Warhol, actress, model, socialite and the original 'It Girl' Edie Sedgwick was a true Icon whose style still has an influence today.

The legendary Ciao! Manhattan, which sees the iconic Superstar take centre stage in her crowning - and only major role - a film that took years to make and was finally released in 1972 after her tragic death, has long been unavailable in the UK. But now, courtesy of Second Sight, the film is receiving its first ever Blu-ray release, arriving on 20th August 2018 complete with fascinating special features, including commentaries, interviews and 'the lost Ciao! Manhattan reels'

Written and directed by Factory regulars John Palmer and David Weisman this cult film is a semi-biographical take on Sedgewick's life and captures a seminal time in history, the groundbreaking 1960s New York art scene.

Blending fact with fiction and filled with mesmerising footage of the infamous underground art movement and Warhol's Factory, the film follows the story of a young woman, Susan Superstar, whose partying lifestyle and celebrity leads to her downfall. The film is interspersed with interviews with the actress and is made all the more poignant as sadly Sedgwick died shortly after the film was completed.

Ciao! Manhattan is a haunting portrait of a cultural icon.

A former Marine turned doorman at a luxury New York City high-rise must outsmart and battle a group of art thieves and their ruthless leader in The Doorman, released on DVD 25th January 2021 from Lionsgate Home Entertainment.

A showdown between two kids about eleven, in a local playground. Swollen lips, broken teeth... Now the parents of the "victim" have invited the parents of the "bully" to their apartment to sort it out. Cordial banter gradually develops a razor-sharp edge as all four parents reveal their laughable contradictions and grotesque prejudices. ...
Movie quote