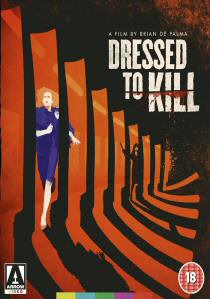 After sexually frustrated housewife Kate Miller (Angie Dickinson) has a session with her psychiatrist Dr Elliott (Michael Caine), she silently seduces a man in an art gallery, an assignation that ends in murder and the only witness, high-class prostitute Liz Blake (Nancy Allen) being stalked by the killer in turn.

One of Brian De Palma's darkest and most controversial suspense thrillers, Dressed to Kill, released on DVD and Blu-ray by Arrow Films on 29th July 2013, was as acclaimed for its stylish set-pieces and lush Pino Donaggio score as it was condemned for its sexual explicitness and blatant borrowings from Alfred Hitchcock in general and Psycho in particular.

But the glee with which De Palma turns this material inside out is completely infectious, as he delves deep inside the troubled psyches of his characters (critic Pauline Kael said that the film was "permeated with the distilled essence of impure thoughts") in order to undermine expectations at every turn.