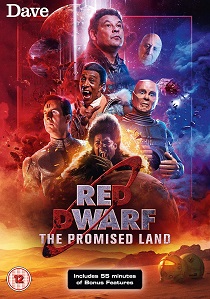 Red Dwarf: The Promised Land, released on DVD and Blu-ray 1st June 2020 from BBC Worldwide, is the thirteenth outing of the legendary sci-fi comedy.

Three million years ago... David Lister, a vending machine repairman, was sentenced to eighteen months in suspended animation for smuggling his pregnant cat aboard the mining ship Red Dwarf. While Lister remained in stasis, a radiation leak killed the rest of the crew. Safely sealed in the hold, the cats evolved into humanoid form. The cats now roam deep space in a fleet of their own...