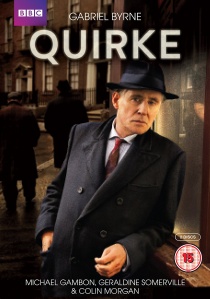 From award-winning writers Andrew Davies (Pride & Prejudice) and Conor McPherson, adapted from the books by the novelist John Banville and set against a rich and smouldering backdrop of whiskey-soaked bars and elegant Dublin houses brimming with sexual tension, Quirk is a bold, mesmerising crime-drama full of mystery, secrets and intrigue. With a star-studded cast, including Gabriel Byrne (Secret State, The Usual Suspects), Michael Gambon (Harry Potter, Emma), Geraldine Somerville (Titanic, Harry Potter), Colin Morgan (Merlin) and Aisling Franciosi (The Fall), Quirke will be released on BBC DVD on 9th June 2014.

Gabriel Byrne plays Quirke, a consultant pathologist in a Dublin city morgue in the 1950s. Quirke is a powerful character more at ease among the cold silent slabs of the morgue than the company of his fellow men. But in truth, his profession provides his greatest pleasure: inquisitive by nature, he is fascinated with unlocking the secret to these cadavers' deaths. After a body vanishes from his mortuary one night Quirke's curiosity is piqued by the lengths his brother is prepared to go to, to cover up the cause of one young woman's death in childbirth.

As Quirke turns accidental detective, he delves deep into the secrets of Dublin and discovers his investigations are more closely linked to his own life than he could ever have imagined. Little by little he is forced to confront the sins of his past as he peels back the layers of his own tangled family history.

DVD
In Brian And Charles, released on DVD and Blu-ray 10th October 2022 from Mediumrare, an inventor lives alone in a remote village in the countryside, inventing useless things out of found objects in his garage. That is until ... END_OF_DOCUMENT_TOKEN_TO_BE_REPLACED
Top PicksView