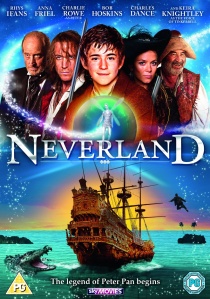 NewsAdventure
News Article Go back to homepage
Step back in time to when the greatest story of all began, as Neverland arrives on Blu-ray and DVD on 28th May 2012 courtesy of Twentieth Century Fox Home Entertainment.
Twentieth Century Fox Home Entertainment
Unknown
28/05/2012
As an Amazon Associate we earn from qualifying purchases
Buy DVD
Buy BD
Information

Step back in time to when the greatest story of all began, as Neverland arrives on Blu-ray and DVD on 28th May 2012 courtesy of Twentieth Century Fox Home Entertainment. Featuring a stellar British including Rhys Ifans (Harry Potter and The Deathly Hallows - Part 1), Anna Friel (Limitless), Charles Dance (Going Postal) and the voice of Keira Knightley (Pirates of the Caribbean) as Tinker Bell this production also sees the return of Bob Hoskins to the role of Smee, a part he made famous in Steven Spielberg's Hook.

Originally broadcast on Sky, this magical adventure marks the beginning of the Peter Pan story and introduces Peter (Charlie Rowe), a happy-go-lucky orphan who makes a living by pick pocketing alongside his pals on the streets of London and lining the pockets of ringleader James Hook (Ifans).

When Hook is charged with a particularly lucrative job - stealing a mysterious orb from an antiques shop - he involves his lads, but things go awry when the orb is dropped and the entire gang is transported into a distant world the locals call 'Neverland'.

On arrival the newcomers quickly realize they are not alone and when confronted by a hoard of swashbuckling pirates led by Captain Bonny (Friel), a tribe of Native Americans and a swarm of tree spirits, allegiances are formed and the group is torn apart. Will any of them ever return to London?

Introducing The Lost Boys, Captain Hook, Tinker Bell, The Indians, a hungry crocodile and Neverland itself, this is an adventure for all the family. Neverland on Blu-ray and DVD also includes exclusive interviews with the cast, a look behind the scenes and a making-of featurette.