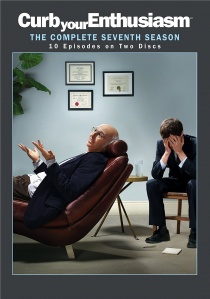 Larry David returns in the best season of Curb Your Enthusiasm yet! Catch him in all his toe-curling glory as The Complete Seventh Season makes its debut on 7th June 2010 from HBO Home Entertainment. Also released on the same day is a stunning box set housing the complete series one to seven so you can catch up on one of Ricky Gervais' favourite shows.

Still estranged from his wife Cheryl (Cheryl Hines) and living with the Blacks, Larry (David) finds himself embroiled in the usual cauldron of self-made crises... but this time the plot thickens as he manages to bring the renowned cast of Seinfeld into the chaos with him!

The seventh season finds Larry continuing to cope with the aftermath of his separation form Cheryl, even as his life remains intertwined with Loretta Black (Vivica A. Fox) and her family. After years of resistance, Larry agrees to do a Seinfield reunion special when he realizes that giving Cheryl a major role might get her to take him back. Predictably the move has far-reaching and hilarious consequences - just not in the way that Larry intended.

Each half-hour episode of Curb Your Enthusiasm features verité-style footage of David (playing himself) at home, at work and around town, as he gets into predicaments with fictional and real-life personalities. With cast regulars Jeff Garlin (as manager Jeff Greene) and Cheryl Hines (as wife Cheryl) reprising their roles, the series features appearances by guest celebrities including Christian Slater, Ben Affleck, Meg Ryan, John Schneider and Elizabeth Shue either playing themselves or in character roles.

Candid, unsparing and self-deprecating, Curb Your Enthusiasm brings the off-kilter comic vision of Larry David--co-creator and co-executive producer of one of the most lauded comedy series in TV history, Seinfeld--to HBO. The series blurs the lines between reality and fiction, as David (playing himself) and a cast of real and fictional characters is followed around Los Angeles by a ubiquitous camera that chronicles the private, often banal world of a (relatively) public man.

Having evolved from the 1999 HBO special Larry David: Curb Your Enthusiasm, this series proves how seemingly trivial details of one's day-to-day life--a trip to the movies, a phone call, a visit from some trick-or-treaters--can precipitate a "Murphy's Law" chain of misfortune to hilarious effect. Like George Costanza in Seinfeld, the protagonist of Curb Your Enthusiasm has a knack for getting himself into uncomfortable situations that end up alienating him from peers and acquaintances. To keep the narrative fresh and spontaneous, Curb Your Enthusiasm is shot without a script; the cast is given scene outlines and often improvise lines as they go. The result is an unpredictable format that's unlike anything else on TV.

HotUHD
StudioCanal is thrilled to announce that the iconic cult classic, Highlander, is being released to own on 4K UHD for the very first time 31st October 2022 with brand-new artwork from celebrated artist Matt Ferguson. END_OF_DOCUMENT_TOKEN_TO_BE_REPLACED
Top PicksView