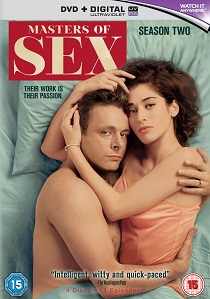 In season two, Michael Sheen (Midnight in Paris) returns as the brilliant and renowned fertility specialist (Dr. William Masters), and Lizzy Caplan (Mean Girls) plays his invaluable assistant and lover (Virginia Johnson). One of the most compelling, real-life event dramas on television, Masters Of Sex - Season 2 finds Masters and Johnson in a continual struggle to get their work back on track, while their personal relationship becomes much more intimate and complex.

All 12 episodes of Masters Of Sex - Season 2 will be available on the DVD set, along with the compelling Making History featurette that explores the time period shift from the '50s to the '60s, along with the social issues introduced.

Having been dismissed by Maternity Hospital, Dr. William Masters (Michael Sheen) needs a place where he and Virginia Johnson (Lizzy Caplan) can resume their work. But thanks to their study's controversial topic - sex - they are forced out of two more hospitals before deciding to open their own clinic. With the seeds of the sexual revolution being sown and the simmering civil rights movement exploding around them, the intimate relationship they started under the guise of their research unravels as the result of Masters' sudden impotence. With the prospect of treating sexual dysfunction becoming increasingly important to their patients and themselves, at home Masters confronts his wife's growing disaffection and the unexpected return of his estranged brother, while Johnson faces a crisis of her own when the publicity surrounding their work places the custody of her two children in doubt.

HotUHD
Now more stunning than ever before, return to the stunning locations and epic adventures in Peter Jackson's Middle-earth in The Lord of the Rings Trilogy, arriving on stunning 4K UHD 30th November 2020 from Warner Home Video. END_OF_DOCUMENT_TOKEN_TO_BE_REPLACED
Hot PicksView