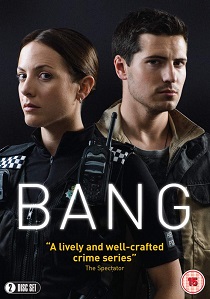 Set in the steel town of Port Talbot, loner Sam has his life transformed when he comes into possession of a gun and starts to break the law. His ambitious policewoman sister Gina (Catrin Stewart) is paid to uphold it and makes it her mission to find the owner of the weapon. The family saga plays out against an inquiry into the shooting of a local businessman that raises questions for Sam (Jacob Ifan) and Gina about their father's murder when they were young children.

Winner of BEST DRAMA at the BAFTA Cymru Awards 2018, Bang, released on DVD 25th April 2019 from Spirit Entertainment, is a crime drama about blood, love and human relationships.

Much of the dialogue is through the medium of Welsh, which will be subtitled in English.

BD
A 13-year-old girl named Meilin turns into a giant red panda whenever she gets too excited in Disney and Pixar's 25th feature film Turning Red, released on DVD, Blu-ray and 4K UHD 2nd May 2022 from Walt Disney Home ... END_OF_DOCUMENT_TOKEN_TO_BE_REPLACED
Top PicksView