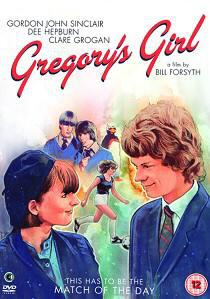 Listed as one of Barry Norman's 50 Best Ever British Films in the Radio Times and number 30 in the BFI's Top 100 British Films, Gregory's Girl is a truly outstanding piece of classic British cinema from renowned director Bill Forsyth. Second Sight Films is delighted to announce a newly restored version to be released on DVD, Blu-ray, download and video-on-demand.

Altered Images' Clare Grogan stars alongside John Gordon-Sinclair and Dee Hepburn in this heart-warming coming of age British classic, which garnered a BAFTA award for best screenplay, and nominations for best film and best director, it now comes to DVD and Blu-ray complete with a host of fantastic new special features and for the first time in widescreen on 5th May 2014. It will be available for download on 21st April 2014 and VOD on 28th April 2014.

Gawky teenager Gregory Underwood (Gordon-Sinclair), loses his place as striker in the school's shambolic football team but soon finds comfort with the arrival of new star signing Dorothy (Hepburn). 'She's ab-sol-ute-ly gorgeous' he pines to his equally girl-obsessed mates. He sets out to win her heart, but when he finally gets a dream date there's a surprise in store.

DVD
When the world is locked down, they'll find their ticket out in Locked Down, released on DVD 7th June 2021 from Warner Home Video. END_OF_DOCUMENT_TOKEN_TO_BE_REPLACED
Top PicksView