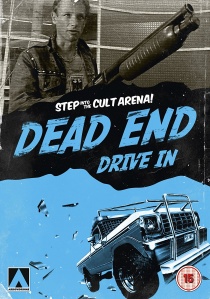 Available on UK DVD from 8th April 2013, Dead End Drive-In is one of the classic grindhouse movies, pitting the dregs of society against each other in a crazed battle of atomic punks, burnt out junkers and a totally corrupt police force.

Set in an apocalyptic future, where crimes rates have spiralled out of control and the economy has permanently collapsed, those in charge have found a perfect solution to the rise of lawlessness... Lock away the undesirables, criminals and low down dirty scumbags in old drive-in movie theatres, which have been converted into violent and deadly concentration camps.

Jimmy and Carmen, a young couple, arrive at their local Drive-in theatre hoping to catch a movie, but when the tyres and gas from their car are stolen and siphoned, they find themselves trapped in the chaos that is Dead End Drive-In... Can they escape before becoming resigned to a hellish existence among the freaks and loons? There's a party every day, a movie every night and all the junk food you can eat. What more can a kid dream of... except to get out!

Dead End Drive-In was made at the twilight of a unique period in filmmaking; fondly know as Oz-ploitation. The term refers to the onslaught of exploitation genre films that were produced in Australia from the early-1970s through to the mid-1980s.

Born in England in 1946, Brian Trenchard-Smith moved to Australia in his early 20s, first editing news broadcasts and later cutting promo spots for television and movie trailers. His first notable success in the film industry was with The Man From Hong Kong, Australia's first ever martial arts movie. Only Trenchard-Smith's second feature, the hallmarks of his style were already on display: mind blowing stunt work; kinetic yet graceful camera movement; an epic eye for composition, recalling Hollywood legends Robert Aldrich and John Sturges; and a wry, eccentric sense of humour.

These diverse tendencies of Trenchard-Smith's style would develop over time and in the movies that followed -Stunt Rock, Turkey Shoot and BMX Bandits - but it wasn't until "Dead End Drive-In", arguably the director's most fully realized artistic vision, that they reached their apex.

It's undeniable... Dead End Drive-In is a bona fide classic of cult cinema. Ignored, misunderstood and reviled by virtually everyone upon release in 1986, over the past twenty-seven years it has attracted a fiercely loyal following of fans, critics and filmmakers from around the world.