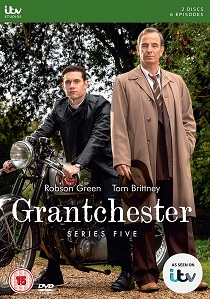 It's 1957, the year that Prime Minister Harold MacMillan told the British people that they'd "never had it so good", and for many in Grantchester, that's just how it feels!

Will Davenport has settled into his role as the vicar of Grantchester, preaching to a packed church. His best friend, Detective Inspector Geordie Keating, has come to accept his wife Cathy's commitment to her job - just about. Mrs C happily juggles her roles as the vicarage housekeeper and being a well-to-do married woman, and after a trip to Marrakech, even Leonard has managed to carve out some happiness with Daniel.

It's as if the world of Grantchester has returned to an idyllic state - a metaphorical Garden of Eden. And Will believes that everyone can get close to their own Eden through good works and a proactive attitude. But - as Geordie knows - trouble always finds a way: every Eden has its snakes...

From a student's misadventure at one of the female-only colleges, a hit-and-run that leads them to a secret garden, a murder in a cinema, a death at a drug trial to a dangerously oppressive convent - Will's faith will be thoroughly tested as he and Geordie are reminded once more that there's darkness lurking in their little corner of Cambridgeshire...

BD
After more than thirty years of service as one of the Navy's top aviators, Pete 'Maverick' Mitchell is back where he belongs as Top Gun: Maverick flies onto DVD, Blu-ray and 4K UHD 31st October 2022 from Paramount Home ... END_OF_DOCUMENT_TOKEN_TO_BE_REPLACED
Top PicksView