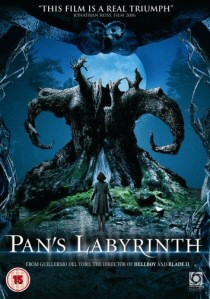 Visionary director Guillermo del Toro brings his compelling and beautiful vision to the screen in Pan's Labyrinth, released by Optimum Home Entertainment from 12th March 2007. Fresh from its massive UK box office success, this enchanting yet dark fairytale can be seen as a companion piece to the haunting The Devil's Backbone and is del Toro's most personal film yet.

Set during the end of the Spanish Civil War, Pan's Labyrinth tells the story of Ofelia (Ivana Baquero, Fragile) whose mother has recently remarried. Ofelia and her heavily pregnant mother move to the country and into the house of the new husband, coldly authoritarian Vidal (Sergi Lopez, Dirty Pretty Things), a captain in Franco's army.

Finding her new life hard to bear, the young girl seeks refuge in a mysterious labyrinth she discovers next to the sprawling family house. Pan, the guardian, a magical creature, reveals that she is none other than the long lost princess of a magical kingdom. To discover the truth, Ofelia will have to accomplish three dangerous tasks, as well as risking incurring the wrath of her dangerously volatile stepfather.