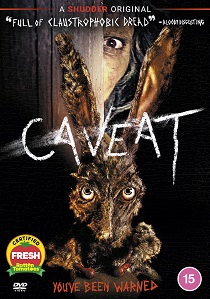 Damian McCarthy makes his dramatic directorial debut with the 'impressive and often terrifying' (The Guardian) Caveat, a Shudder Exclusive set for its UK Blu-ray debut from Acorn Media International on 28th February 2022. It will also be available on DVD and digital.

Amnesiac drifter Isaac (Jonathan French - A Soldier's Voice, The Anniversary) struggles to recall his recent past after a traumatic event, but shifty 'friend' Barret (Ben Caplan - Murder on the Orient Express, Ghostbusters) offers to help him back on his feet with a profitable babysitting job. All he has to do is look after his adult niece (Leila Sykes - Missing Something, Lancaster Skies).

But there is a Caveat: The isolated house is plagued by a gruesome past which has left Olga psychologically disturbed, and Isaac must wear a leather harness and chain restricting his movement to certain rooms. Once in the harness and left alone with Olga, a terrifying game of cat and mouse ensues, and Isaac must fight for survival amid the unsettling resurgence of his own memories. Can Isaac piece the fragments together before it's too late?

A Caveat for viewers: there's deeply unsettling forces at work in this eerie and evocative nightmare-fuelled feature.