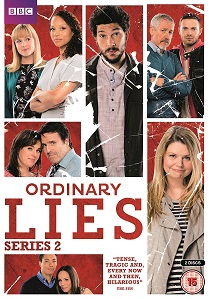 Featuring a brand new setting and cast of characters, Ordinary Lies, the critically acclaimed drama created and written by Danny Brocklehurst, is released on DVD on 28th November 2016, courtey of BBC Worldwide.

With each episode focusing on a different character, the show depicts the everyday lives of those working in the company's warehouse and call centre, whose private antics are anything but ordinary. The characters include an ex-alcoholic who suspects his wife of cheating on him, an assistant who decides to temporarily claim her boss's lifestyle, a manager who moonlights as a vigilante and a couple struggling to cope with the pressures of family life.

The first episode tells the story of head of sales, Joe. Popular with his colleagues, Joe is the life and soul of the office and always the first to tell a joke. However, his cheery demeanour is knocked when he is sent home early from work after an injury to find wife Belinda acting strangely.

HotDVDBD
From the producers of Nobody and John Wick comes a bare-knuckle, coal-dark holiday action-comedy that says you should always bet on red as Violent Night sledges in on DVD and Blu-ray 6th March 2023 from Warner Home Video. END_OF_DOCUMENT_TOKEN_TO_BE_REPLACED
Top PicksView