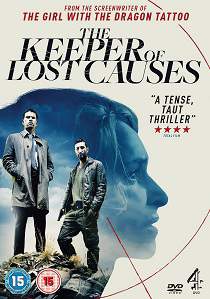 Based on the award-winning novel 'Mercy' from the best-selling Department Q crime series by Jussi Adler- Olsen, the gripping thriller The Keeper of Lost Causes is released via Download to Own from 15th December 2014 and on DVD and Video on Demand from 22nd December 2014, courtesy of Channel 4 DVD.

Carl Mørck (Nicolaj Kaas, The Killing) is a troubled detective who takes the fall when his partner is wounded during a routine operation. Reassigned to the newly created Department Q, a basement-bound job filing cold cases, he is allocated a new assistant, Assad (Fares Fares, Zero Dark Thirty, Safe House), a smart young Muslim cop. Always one to go against orders, Mørck throws them headlong into the mystery of a politician's disappearance (Sonja Richter, The Homesman) five years earlier. Believing the case to be unsolved, they embark on a dangerous journey that will uncover a shocking truth, leading to a thrilling and unforgettable climax.

From the producers of Nymphomaniac and the screenwriter of The Girl With The Dragon Tattoo, this Scandinoir's pedigree speaks for itself. Learn the truth when The Keeper of Lost Causes comes to DTO, DVD and VOD this December.

UHD
Disney and Pixar's original feature film Luca, released on DVD, Blu-ray and 4K UHD on 23rd August 2021, is a fun and heartwarming story about friendship, stepping out of your comfort zone and two ... END_OF_DOCUMENT_TOKEN_TO_BE_REPLACED
Top PicksView