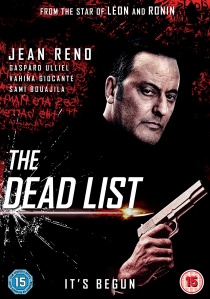 Starring Jean Renio (Leon, Ronin, 22 Bullets) as a patriarch of a violent criminal underworld, The Dead List, released on DVD by Metrodome on 10th October 2011, weaves a powerful portrait of the inner machinations of the ruthless mafia with staggering magnitude.

Keeping his friends close and his enemies closer, Milo (Jean Reno) rules his clan with an iron fist and makes no mistakes, executing grand heists with impenetrable precision.

But things are about to change when his son and heir's loyalty is called into question. With enemies circling and federal agents closing in, Milo must pick his battles, between the son he loves and the men who want him dead.

Masterfully balancing the power struggles within the family and the sheer brutality of the world they inhabit, this explosive action-thriller is set to re-ignite the genre.

HotDVDBDTV
DCI Tom Brannick returns, as the murder of a crooked accountant unravels a trail of greed that threatens to expose the true identity of the legendary assassin, codenamed, Goliath in Bloodlands: Series 2 released on DVD and Blu-ray 14th November 2022 from Dazzler Media. END_OF_DOCUMENT_TOKEN_TO_BE_REPLACED
Top PicksView