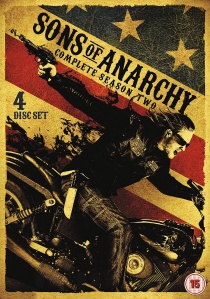 Get ready to put the pedal to the metal once again as Sons of Anarchy: Season 2 comes to Blu-ray and DVD 16th August 2010 from Twentieth Century Fox Home Entertainment. The critically acclaimed, gripping and gritty drama is back with more action, adrenaline, secrets and scandal.

Sons of Anarchy is an adrenaline drama with darkly comedic undertones that explores a notorious outlaw motorcycle club (MC) and its desire to protect its livelihood while ensuring that their simple, sheltered town of Charming, California remains exactly that: charming. The Sons of Anarchy Motorcycle Club Redwood Original (SAMCRO) must confront threats from drug dealers, corporate developers, hate groups and overzealous law officers. Behind the MC's familial lifestyle and legally thriving automotive shop is a ruthless and illegally thriving arms business.

This season Jax and the club deal with the fallout from Donna's death, bringing internal tensions to an all-time high while a new enemy takes root in Charming. LOAN, or League of American Nationalists, is a white separatist organisation headed by Ethan Zobelle (Arkin), who with the help from his lieutenant, AJ Weston (Rollins) opens a cigar shop in Charming and is intent on ingratiating himself with the community and forcing SAMCRO out.

DVD special features include deleted scenes with the Blu-ray providing cast commentaries and deleted scenes. Get ready to rev your engines and don your Sons of Anarchy leathers, when Season 2 and the complete series box set become available to own on Blu-ray and DVD from 16th August 2010.