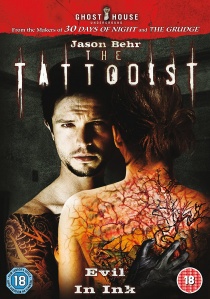 Icon Home Entertainment is pleased to announce the 29th September 2008 DVD release of the supernatural thriller The Tatooist. With a screenplay written by Jonathan King (the director of Black Sheep{/i),} and directed by Peter Burger, the film stars Jason Behr, best known for his leading role opposite Sarah Michelle Geller in Takashi Shimizu's 2004 horror thriller The Grudge, and the critically acclaimed Sci-Fi television series Roswell.

Filmed on location in Auckland, New Zealand and Singapore, American tattoo artist Jake Sawyer (Behr) wanders the world, exploring and exploiting ethnic themes in his tattoo designs. At a tattoo expo in Singapore, he gets his first glimpse at the exotic world of traditional Samoan tattoo (tatau), and, in a thoughtless act, unwittingly unleashes a powerful angry spirit.

In his devastating journey into Pacific mysticism, Jake must find a way to save his new love, Sina (Mia Blake) and recover his own soul.