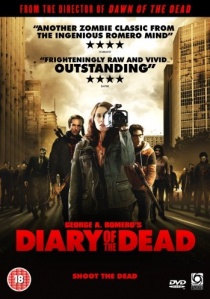 In his first independently produced zombie film in over two decades, George A. Romero returns to ground zero in the history of the living dead when Diary Of The Dead is released on DVD and Blu-Ray by Optimum Home Entertainment on the 30th June 2008.

When a group of film students making a horror movie in the woods discovers that the dead have begun to revive, they turn their cameras on the real-life horrors that suddenly confront them, creating a first person diary of their bloody encounters and the disintegration of everything they hold dear. Told with Romero's pitch-black humour and an unflinching eye on our post-Katrina world, George A. Romero's Diary Of The Dead marks the noted filmmaker's return to his roots. The master of horror returns to the kind of filmmaking he pioneered and the genre he invented. In his first independent zombie film in over twenty years, George A. Romero takes us back to ground zero in the history of the living dead.

Jason Creed and a small crew of college filmmakers are in the Pennsylvania woods making a no-budget horror film when they hear the terrifying news that the dead have started returning to life. Led by Jason's girlfriend, Debra, the frightened young filmmakers set off in a friend's old Winnebago to try to get back to the only safety and security they know: their homes. But there is no escape from the crisis, nor any real home for them anymore. Everything they depend upon, all that they hold dear, is fractured as the plague of the living dead begins to spread. Jason documents the true-life horrors in a tense, first-person style that heightens the reality of each encounter. Even as his friends die, even as they are attacked by ravenous walking corpses at every stop along the way, Jason keeps filming, an obsessive, unflinching eye in the midst of chaos.

The government first denies, then promises to quell the crisis, but can't. Technology fails. Communication with the rest of the world becomes impossible. Jason and what remains of his crew end up on their own, a handful of lucky survivors, reliant on no one but themselves to stay alive. They take final refuge in a fortress of a mansion, but their sanctuary turns out to be a trap from which there is no escape. Throughout it all, the cameras keep rolling, recording every detail for future generations... if any survive.

Related Articles
Night Of The Living Dead: The Criterion Collection, Creepshow, Knightriders, Season Of The Witch, The Dark Half, Dawn Of The Dead: Limited Edition
The Shrine
Comments
BD Releases News Pick