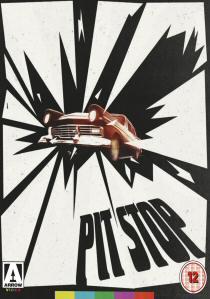 Arrow Video is delighted to announce the latest addition to its roster of Jack Hill movies with the muscular stock car racing melodrama, Pit Stop, released as dual-format DVD and Blu-ray on 7th April 2014.

Following the release of blaxploitation classic Foxy Brown and the truly one-of-a-kind Spider Baby, Pit Stop has been treated to an all-new restoration (overseen by technical supervisor James White, previously responsible for Arrow Video's acclaimed Blu-rays of Zombie Flesh Eaters, Time Bandits and The Fury) that hopes to bring fresh interest to one of Hill's lesser-known but arguably greatest works.

Complementing this dual-format Blu-ray and DVD edition are a host of all-new extras, including an audio commentary with Hill, interviews with Hill, Haig and producer Roger Corman and a demonstration of the extensive restoration work by James White. The accompanying collector's booklet includes new essays by US critic Glenn Kenny and the musicologist Gray Newell, who relates the history of forgotten Seattle psych band The Daily Flash and their soundtrack to Pit Stop.

The most dangerous game ever devised, to pit man against man, flesh against steel - the figure-8 race! Jack Hill (Coffy, Foxy Brown) follows up Spider Baby, once again teaming up with Sid Haig (House of 1000 Corpses) in one of his greatest roles for this action-spectacular crash-o-rama!

Richard Davalos (East of Eden) stars as Rick Bowman, a street punk who winds up in jail after a street race goes wrong. Bailed out by race promoter Grant Willard, Davalos is put in the deadly track where he comes up against Haig's maniacal winner Hawk Sidney. Featuring an outstanding supporting cast including Brian Donlevy (The Quatermass Xperiment) in his last film appearance, Ellen Burstyn (The Exorcist), billed as Ellen McRae and Beverly Washburn (Spider Baby), Pit Stop is one of Hill's lesser known films but arguably his greatest.

Filmed on a real figure-8 track, Hill and his crew were able to capture gripping real-life car wreck scenes lending the film a brilliant sense of realism. You've never seen a motion picture like this before - can you take it?