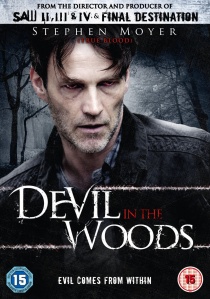 Evil comes from within. Starring Stephan Moyer of the award winning True Blood, Devil In The Woods is released on DVD on 3rd March 2014, courtesy of Kaleidoscope Home Entertainment.

Richard Marlow (Stephan Moyer) is eager for his son, step-daughter and new wife to get along, so plans a family vacation. Wanting to get away from it all, the reclusive Pine Barrens are headed to. But on arrival, an escape from civilisation is far from possible, the main camp site being oversubscribed and full of reminders of the life they are trying to escape.

Desperate for real solitude, Richard leads them deeper into the woods. Yet, it s clear that all is not peaceful as animals are found mutilated and horrifically killed. Struck down by illness, Richard and his family are stranded as the local legend of the Jersey Devil that stalks the darkened woods, starts to haunt their thoughts.

What started out as a peaceful family trip ends up being a deadly nightmare as insanity takes over and the Devil, inside and out, will stop at nothing...

BD
A 13-year-old girl named Meilin turns into a giant red panda whenever she gets too excited in Disney and Pixar's 25th feature film Turning Red, released on DVD, Blu-ray and 4K UHD 2nd May 2022 from Walt Disney Home ... END_OF_DOCUMENT_TOKEN_TO_BE_REPLACED
Top PicksView