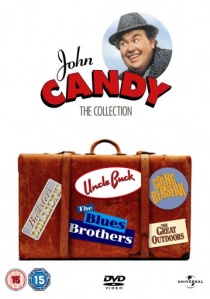 News
News Article Go back to homepage
Throughout the 80s and 90s, John Candy created some of Hollywood's most memorable comedy characters. Now Universal Pictures has announced the ultimate tribute to a truly unique talent. Comprising five all time favourites, The John Candy Collection will be available to buy on 12th November 2007.
Universal Pictures (UK)
Unknown
12/11/2007
Thank you for supporting DVD365.net when you order using the link(s) below. As an Amazon Associate we earn from qualifying purchases
Buy DVD
Information

Throughout the 1980s and 90s, John Candy created some of Hollywood's most memorable ever comedy characters: generous losers and big-hearted chumps who were never pathetic, but loveable and genuine. Now Universal Pictures is delighted to announce the ultimate tribute to a truly unique talent. Comprising five of the funny man's all time favourites (including the DVD premiere of Going Berserk), The John Candy Collection will be available to buy as one unmissable box set on 12th November 2007.

John Candy teams with some of the stars of the hugely successful US television hit show Saturday Night Live, John Belushi and Dan Aykroyd among them. And when Belushi and Aykroyd had a chance to bring their SNL act of The Blues Brothers to the big screen, they made sure Candy was part of the cast. The tale of brothers Jake and Elwood and their quest to raise funds for a Catholic orphanage by reforming their band is the stuff of movie legend. The film boasted many memorable cameos including James Brown, Ray Charles and Aretha Franklin.

This hilarious farce stars Candy as a chauffeur who falls for the daughter of a stuffy senator. Desperate to make a good impression on his future father-in-law, John is instead captured by members of an inept religious cult who have targeted the senator for assassination. His capturers attempt to brainwash Candy into assassinating the politician, but things don't go quite as planned.

Candy plays baseball player Spike whose team mate and friend, Brewster (Richard Pryor), is suddenly left $300 million by a distant relative. But there's a catch: Brewster must spend $30 million in thirty days without having any assets to show for it. And if he reveals to a soul the real reason why he's throwing away all his cash, he will forfeit everything!

Candy teams up again with Dan Aykroyd in this raucous tale about an unannounced, uninvited and unwelcome family of fun-loving misfits who converge upon a lakeside resort to join their relatives for a summer of relaxation. Needless to say it turns into a vacationer's worst nightmare, as wheeler-dealer Aykroyd, his sexually repressed wife and strange twin daughters "join" the easygoing Candy and his straight-laced clan for a season of "fun" in the sun. Unfortunately, the only thing these two brothers in-law have in common is their intense dislike for each other and a desire to prove which one of them really, really knows how to enjoy 'The Great Outdoors'.

A true comedy classic, Uncle Buck is arguably Candy's most memorable creation. When Bob and Cindy Russell have to leave town for a family emergency, they are left with no alternative but to call in Bob's brother, Buck, to baby-sit. A jobless, lifelong bachelor - albeit with a heart of gold - Buck is hardly the ideal baby-sitter. Charged with looking after his rebellious teenage niece, Tia and her two outspoken younger siblings, Maizy and Miles (Macaulay Culkin), Buck finds himself adrift in suburbia. Little by little however, and against all the odds, he begins to put the needs of the children before his own, earning their love and respect... and with it a second chance at happiness with his estranged girlfriend (Amy Madigan).