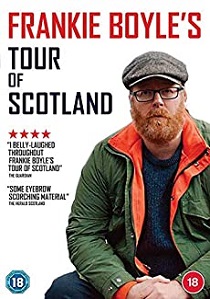 NewsTV SeriesComedy
News Article Go back to homepage
Exploring his home country of Scotland as he goes on his first stand-up tour since 2012, Frankie Boyle is back in Frankie Boyle's Tour Of Scotland, the hilarious 4-part series released on DVD
Frankie Boyle
Graeme Hart
Graeme Hart
Dazzler Media
2 hours 0 minutes
07/12/2020
#FrankieBoylesTourOfScotland
Thank you for supporting DVD365.net when you order using the link(s) below. As an Amazon Associate we earn from qualifying purchases
Buy DVD
Information

Frankie Boyle is back! Frankie hasn't done a proper tour of Scotland in over a decade, so by way of preparation for a run of big theatre shows, he's gone back on the road to gig at some colourful smaller venues around the country, culminating at a homecoming gig in Glasgow.

But this is more than just a tour, Frankie's keen to get under the skin of his home country for this four-part series for BBC Two. He's intrigued to explore and document what he sees along the way, so across the four journeys he makes unlikely diversions between gigs, and meets people he thinks could help him understand where Scotland's really at in 2019.

Throughout this authored series of documentaries, from the cities of the south to the wilds of the north, Frankie refracts the story of Scotland through his own unique prism, taking a fresh and surprising look at the history alongside contemporary ideas of Scottish identity.

UHD
Pixar Animation Studios presents Cars, the high-octane adventure comedy that shows life is about the journey, not the finish line, zooming in for the first time on 4K Ultra HD 19th July 2021, exclusive to Zavvi. END_OF_DOCUMENT_TOKEN_TO_BE_REPLACED
Top PicksView