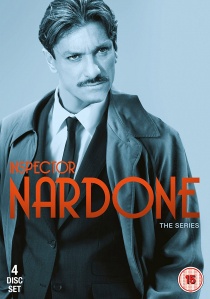 Arrow Films' Noir label continues to scour the globe bringing UK viewers the very best in foreign language film and television. Following the incredible success of Danish dramas The Killing, Borgen and The Bridge and French title Braquo, Nordic Noir are pleased to announce the arrival of a host of new Italian shows to their roster of Noir titles.

Such is the strength of Italian crime television that Arrow Films have launched Criminale Italia, an exciting new subsidiary of their Noir label. Alongside the upcoming and acclaimed modern-day Italian gangster epic Gomorrah, the label will release the hugely popular Italian shows Inspector Nardone and Fog & Crimes on DVD from 27th October 2014.

Post-war Milan is the ideal breeding ground for a new wave of criminal activity. A crime-scene that is very different from what we are used to today: an old-fashioned system of organized crime, made up of thieves and outlaws who share a specific moral code, which absolutely condemns homicide. A new chief officer is assigned to the Milan Police Department, as if to settle a score for having exposed his corrupt colleagues. This is just one of the various difficulties that Mario Nardone, an authentic Neapolitan, must face in the sophisticated and urbane Milan. A city which, nevertheless, Nardone loves unconditionally and where he plans to bring up his beloved, albeit somewhat neglected, children.

Based on a real figure, Mario Nardone was a true legend in Milan during the 50's and 60's. Straightforward, persistently stubborn but also endowed with a strong moral code and a great sense of humanity, Nardone has deep loves; including his long-suffering family, good cuisine and cracking jokes at every opportunity.

Inspired by the four famous novels by Valerio Varesi, each episode follows an investigation by Soneri, Ferrara Police Chief. He works with a faithful squad on a series of crimes, each hiding a disturbing mystery, with the startling and grotesque undertones of the apparently calm world of the wealthy countryside.

UHD
Fast forward to the 1980s as Wonder Woman's next big screen adventure finds her facing a wide array of foes including Max Lord and The Cheetah as Wonder Woman 1984 flies in on Blu-ray and 4K UHD 22nd March 2021 from Warner ... END_OF_DOCUMENT_TOKEN_TO_BE_REPLACED
Top PicksView