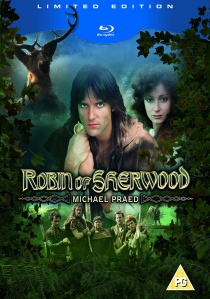 A benchmark of quality television drama in the 1980s and arguably the definitive interpretation of the Robin Hood legend, the BAFTA-winning series Robin of Sherwood - Michael Praed is presented by Network DVD on 15th November 2010 for the first time in High Definition.

With a haunting theme from Clannad, strong scripts and outstanding performances from Ray Winstone, Clive Mantle, Judi Trott and Nickolas Grace, to name a few, Robin of Sherwood was, and remains, a worldwide hit. With new HD transfers taken from the original film elements, the first two series are presented here at a quality level never previously seen.

HotDVDBDUHD
In celebration of its 25th anniversary, one of Luc Besson's most incredible movies, Leon, has been restored to stunning 4K and is being released on 4K UHD, Blu-ray and DVD 11th November 2019 from StudioCanal. END_OF_DOCUMENT_TOKEN_TO_BE_REPLACED
Top PicksView