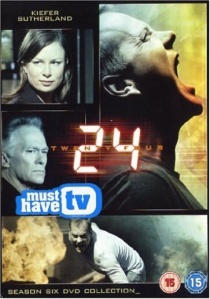 Jack Bauer (Kiefer Sutherland) makes his explosive return to 24 on 1st October 2007 as the sixth season of the Emmy-nominated TV series is released on DVD for the first time, courtesy of Twentieth Century Fox Home Entertainment.

To celebrate the release, Rick Schroder, who stars as CTU's Mike Doyle, will be in the UK at the end of September to celebrate this long-awaited release. Season six picks up 20 months after last season's shocking season finale, when Jack Bauer was captured, battered and bloodied by Chinese government agents and taken away to an unknown destination with his future in question.

Since then, life for the main characters has changed. Wayne Palmer (DB Woodside), the strong-minded brother of murdered President David Palmer is now President of the United States and is aided by his sister Sandra Palmer (Regina King) - a powerful advocacy lawyer. Karen Hayes (Jayne Atkinson), who has moved to Washington to become one of President Palmer's advisors, is now married to CTU Head, Bill Buchanan (James Morrison) but she soon discovers that life in the White House is not what it seems and both she and Bill are faced with dilemmas that could cost them both the careers they have worked so hard to build.

After a series of horrific terrorist attacks, Palmer and his team of White House advisors, Karen Hayes and Tom Lennox (Peter MacNicol), together with CTU colleagues Chloe O'brian (Mary Lynn Rajskub), Curtis Manning (Roger Cross), Mike Doyle (Rick Schroder) and Bill Buchanan begin an unthinkable, nail-biting day. Once more, CTU is challenged to stop the latest terrorist attacks on Los Angeles, but could some familiar faces be involved this time and will Jack be in a fit state to return to save the day one more time?

The complete sixth season is being released with a variety of 'extras' including deleted and extended scenes, webcasts, behind-the-scenes footage, a special cameo appearance by Ricky Gervais and a re-cap of the first episode of Prison Break season 2.